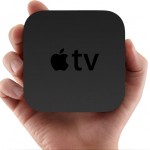 After months of speculation, Steve Jobs, in his legendary  ‘One last thing’ section of the 1 September keynote, unveiled the new Apple TV, or Apple TV 2010 as I like to call it.

My prediction in the last blog post was wrong. Apple did reveal a new Apple TV device and it’s a big change from the previous version. The major change is the move away from the Apple TV being viewed as a media centre. In all fairness, Apple never positioned the older Apple TV as such, always regarding it as an experiment, a hobby as Steve Jobs always says.

The new version is priced at £99, certainly falling into the high-end accessory category. Without a hard disk, the new device takes a radical departure from the old version.

The new Apple TV is best thought of as an accessory  for your HDTV. What the 2010 Apple TV does is provide a device that in effect converts your HDTV into an Apple TV i.e an iOS device. With the HDTV always being the centre of attention in any living room, board room or meeting room, Apple TV allows that high definition wide screen to smoothly join the Apple eco system.

This ecosystem is the Mac, iPhone and iPad. With the addition of a new capability called AirPlay, Apple allows for media stored on any of the Apple products to be streamed to your HDTV. Apple, is taking one step closer to the vision of having all media stored in a Cloud and then accessible on any device. No need for a dedicated set-top box.

There is still however a need for a media centre capability, a place to store and manage your content, while the big Cloud vision is being implemented. I’ve been looking into the new Mac Mini, together with a product called Plex, which provides some compelling functionality for a media centre.

The possibilities for using the Apple TV together with the iPad and either a Mac Pro or Xserve to deliver media content are certainly worth exploring. Imagine having all company podcasts, internal training, videos and similar content delivered seamlessly on the iPad or HDTV.

This entry was posted on Sunday, September 19th, 2010 at 4:10 pm and is filed under Apple Inc. You can follow any comments to this entry through the RSS 2.0 feed. Both comments and pings are currently closed.